So, my hair started to grow back a little bit. As you may recall from some of my previous posts, it started growing when I switched over to Taxol.  Before I get into how my new hair makes me feel. Let’s discuss what it looks and feels like.

As far as texture goes, it’s super soft and it seems a bit thicker than before. I’ve been told that when your hair grows back post-chemo it comes in baby soft and it might even come in curly. Like curly, curly. So far, mine is too short to tell.  My onc also told me that he wouldn’t be surprised if it came in really grey.  Well, I’m an A+ student in that regard.  Don’t get me wrong, I always had grey hair (my first appeared in law school) — but this is takin’ it to a whole new level. It’s really grey — it might even be white because from far away, you actually can’t tell that my hair has grown in.

Funny story, the other day I was FaceTiming with my cousin Neal and he said my hair looks “cool” in fact, he said I look like Sisqo. Wha? Do you mean, “Oooh that girl so scandalous…She has dumps like a truck truck truck. Butt like what what what. Baby move your butt butt butt. Let me see that thong. Thong tha tha tha thong” Sisqo? 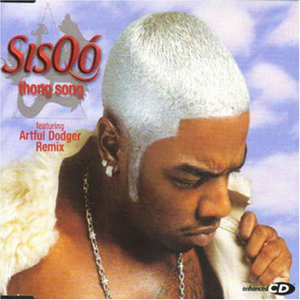 OK. Maybe he has a point. I sorta do look like Sisqo. No bueno, people. No bueno.

Needless to say, I made an appointment with Kelly ASAP and am getting my hair dyed later this week.  I don’t care that it’s probably WAY too short to dye  (yes, my onc said it’s fine to dye if it’s really bothering me that much — but I’ll ask him one more time just to be safe!). I’ve read that chemo re-growth hair can be tricky to dye. Not sure why — maybe it has something to do with all the poison we pump into my body every week. But I’ll be sure to talk to Kelly about it so that my dye job doesn’t turn out brassy and orange or some other crazy color!

Alright, on to how my hair makes me feel. When I first started chemo and had to shave my head, I was really distraught.  My hair was a big part of my identity — but more than that, being bald would signal to the world that I’m “sick”.  I went through the whole bald thing and it was tough, I’m not gonna lie. It was winter, so I had to wear a lot of hats (err, to be truthful, it wasn’t hats plural — just the trusty purple neck warmer!).  When I did go bald in public, of course I was super self-conscious for the first few minutes, but I’d force myself to do it (and Paul would help me by telling me that I look pretty) then I’d totally forget about it and ease into whatever it was that I was doing.  At the end of the day — I was, and am, proud of myself for how I handled all of that, because it was a really, really hard thing to do.

Now that my hair is coming back in AND it’s warming up here in SF, I’m not wearing head coverings all the time.  I’ve noticed a slight shift though. I don’t think I’m getting any more of the “ooh, she’s sick” stares.  Instead I’m getting the “ooh, she’s a hipster who is so cool she doesn’t care about frivolous things like hair” looks.  The last time I was at the gym, a woman stopped me and said “how liberating”. Hhmm, if only lady, it’s not liberating, it’s cancer.

My point is that you’d think I’d be happy, or at least relieved that people aren’t looking at me in a pitying “she’s sick” way any more — rather they just think I’m “hip” — but I’m not happy or relieved for some reason. I’m sad and irritated to be honest.  I’m still undergoing chemo. This isn’t a fashion choice.  This battle is still being waged every single day by me.  Just because I put on some make-up and go outside for a walk, or meet a friend for lunch — without a head covering on — doesn’t mean I’m just like everybody else on the street. I’m still at this people.

Another thing that bugs me is when people say “your only doing taxol now”. What the heck? Did you not get the memo that Taxol is chemo? Sure, it’s not as harsh as my AC rounds, but it’s still chemo. It’s still a really huge thing to be doing every week. Unless you’ve undergone Taxol personally, please don’t say that to me. ever.

I dunno, I guess I’m just at a weird part of this journey where I’m starting to look “normal” again (whatever that means) and we’re 7 months in so people are probably tiring of cheerleading all the time. Or maybe they think it’s better to focus on the fact that I will be done with chemo soon. But when I keep hearing “just a few more weeks and you’ll be done” over and over and over and over  — it minimizes what I’m still doing every week.  I think it’s important to respect the fact that I am still in active treatment and that I have one more month of chemo left to go. In order for me to cope with this, I have to keep my head space focused in the now. And the now is chemo.

I know this is hard on everybody around me and that nobody knows what the right thing to say or do is (myself included), but I’m learning that, as a cancer patient, nearing the end of active treatment has been harder in many ways than the height of chemo or surgical recovery.  I’m extremely worried (almost panicked) that every person in my life will say “ok, you’re done with chemo, this is all over with, back to your old life again” and I know that won’t be possible. Obviously my whole world has changed as a result of my DX, and I won’t be able to snap back into the real world or my old life right away. I’m afraid of the expectations that people will put on me and I’m afraid to let them down. But the truth of the matter is, I’m not super human. I’ve been put through the ringer. I don’t know where I’ve found the strength and energy to come as far as I’ve come and I still have more to go.

Oh, and don’t think it’s lost on me that I write this blog entry as I plan my own “I kicked cancer’s ass” party for late June.  I realize I’m being a hypocrite and saying that it’s OK for me to occasionally think about and talk about the end of my treatment — but not for anybody else to do it (unless, of course, I raise it in conversation with you, then you should engage me in discussion because I clearly feel like spilling my inner most thoughts to you –and if you ignore the topic I’ll think you’re being rude — it’s a roller coaster for you to be my friend, I realize).  I’m a walking double standard. I know. I know.  But I have cancer, so get off my ass 😉

Me thinks it’s time to find a good therapist….