This year has to go down as one of the best birthday’s ever. I’m finally done with active treatment. I got to spend a few days in Vegas at Hoopla with my Stella & Dot peeps (I’ll do a separate post on Hoopla later) — and I played the slots on my birthday and won a small amount of money!

But the best surprise came the day AFTER my birthday when I assumed nothing was really going to happen. You see it all went down like this…

I flew home from Vegas on my actually birthday and I landed around 6:30pm. Paul picked me up from the airport and then we went out for a nice sushi dinner in our neighborhood. Paul had told me two days prior that he was taking me out to dinner on Thursday (the day after my birthday). Normally, I would’ve scrutinized this and questioned his motivations since I was landing on Wednesday with plenty of time to take me to dinner, in fact, we did go out for dinner on Wednesday! But when he told me, I just shrugged it off. Maybe b/c I was busy with Hoopla stuff, maybe I thought he assumed I’d be tired from Hoopla so he’d give me a day to recover (which was true and I did indeed need).

So Thursday rolls around and Paul tells me to be ready by 6pm. Again, my radar doesn’t go off. Nothing. I am totally unsuspecting. Around 5pm I start to get ready, throwing on a casually cool outfit IMO 🙂 Coated black Paige jeans, an over-sized grey t-shirt, grey tissue-y/cotton-y cardi and my Loubs. Surely there’d be no walking involved, we’d just be going from house to uber to restaurant and vice versa, right? Wrong!

Paul told the uber driver where to take us once I was out of earshot. So the driver is now in on the game. He told me I could have three guesses as to our final destination. Paul didn’t love this idea — but I guessed away and was wrong — the driver was giggling and having a blast! Then I decided to try and guess our destination by the streets the driver was taking. He could overhear my theories as I told them to Paul, so he started driving in all sorts of kooky directions to try and throw me off. Gotta love this guy (I gave him a five star rating, and I NEVER give out five stars, never)!

We finally arrive at the Westin St Francis on Union Square. Again, I don’t think too much of this. We are SPG members, so I thought maybe we’re using points for dinner at their restaurant and/or spending the night as a romantic getaway. We walk into the lobby bar and Paul chooses a table with four chairs. I insist we’re being table hogs and we should sit at a two top. He said no, let’s sit here. So he positions it so that my back is to the door (sneaky, sneaky hubby).

Paul is looking at his watch, and texting. Someone is meeting us here for dinner but who? Not my brother and SIL because my bro was on a work trip to DC. Maybe Christine and Sharham? Maybe Shadin and Marwan? Who knows — but this is getting exciting!

Suddenly I see Paul’s eyes light up so I turn around. The exact words out of my mouth were “O M motherfuckin’ G!” I was starring at Josh and Megan. They live in Seattle, what the heck are they doing here?!!

We all used to live in Palo Alto together at HaGA many moons ago. Megan was a bridesmaid in our wedding. Josh is like my third brother!! They conspired with Paul a week ago to fly in and surprise me. Speechless. Absolutely speechless.

We walked over to Amber India (well, I hobbled in my Loubs) and had a decadent dinner. The next day they came to our house for breakfast and then Megan, baby Rose and I spent the day together. Then we met up with Josh and Paul for more merriment. It was the best two days ever.

Thanks Megan, Josh and Paul for be so sneaky. Nobody has ever surprised me for my birthday. And, boy, did you guys really get me. I had no clue!

I feel so blessed to have such loving friends in my life. One word, well, maybe more like two: AH-MAZing! 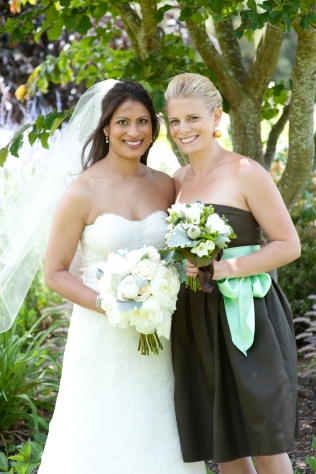 Meg and I on our Catholic wedding day 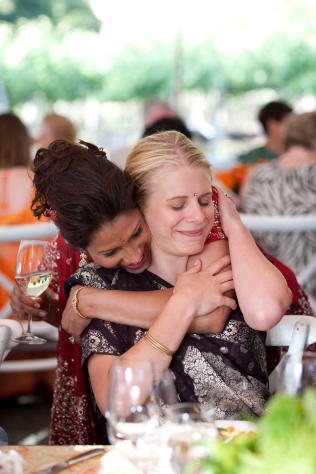 On our Indian wedding day! Tears of joy!!! 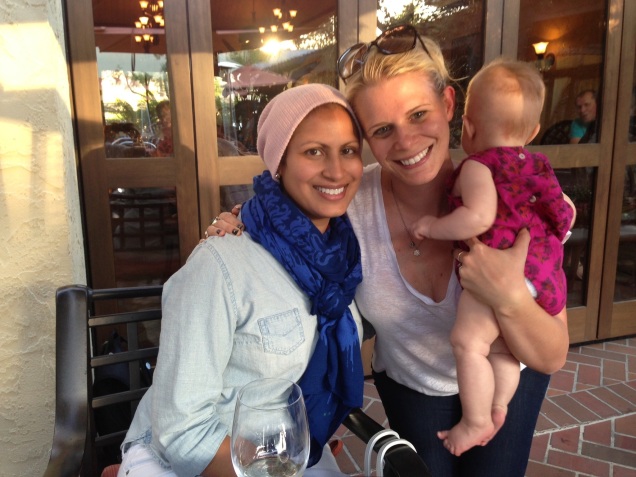